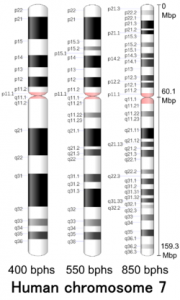 Most studies of Williams-Beuren syndrome have been focused on Caucasians, and few have been conducted on more diverse populations. This is due to a lack of resources in other areas of the world, both in terms of genetic testing and in physicians trained in identifying these facial abnormalities. Therefore, it is difficult to determine if these distinct characteristics would be consistent with all patients with WBS, or just with Caucasian patients. This study explores the features of WBS across different populations, to determine which ones are shared throughout all cases. The study lists the clinical characteristics of 137 patients with WBS with Latin American, Asian, and African ancestry. Although some characteristics varied across populations (for example, growth delay is very common in Latin American group (91%), but it was mentioned in less than half of patients of Asian or African background), distinct traits shared in all groups include intellectual disability, wide mouth, periorbital fullness, malar flattening, and long philtrum.

Limitations in this study exist due to the low number of cases. For example, cases from India and China are classified as “Asian”, even though there may be differences between these populations as well. As the number of cases of Williams-Beuren syndrome increases, the categories can be expanded and can become more discrete.There is also great variation in the severity of symptoms, and some cases present with little to no symptoms. Therefore, many patients of WBS may be overlooked if the intellectual disability is not severe or the facial features are not irregular enough to be noticeable.

A diagnosis of Williams-Beuren syndrome can be difficult to make due to the wide variety of symptoms. Typically, patients are diagnosed between ages 4-5 in developed countries. Therefore, identification of these specific facial features is helpful in making diagnoses of WBS earlier in life, so the symptoms can be addressed before they become serious.

Donate now to increase awareness and research into chromosome disorders.
Chromosome Disorder Outreach is a 501(c)(3) non-profit organization. Your gift is tax deductible as provided by law. Florida Reg CH11200

Physicians, genetic counselors, therapists and other healthcare professionals, register now to help us learn more about rare chromosome disorders: the associated symptoms, new research and evolving treatments. Request notifications of new studies and important publications on our website. Professional contact information will appear on the CDO website unless privacy opt out requested.
REGISTER

Help us in our efforts to raise awareness of rare chromosome disorders by visiting our online store.
VISIT OUR STORE